This is a favorite dish from my childhood. Kunsang Tse Machen la used to make this, and he called it Shogo Momo. But I’m going to call it Shogo Shabril as most people get confused when you say momo as it brings to mind traditional momos, and most think its some sort of mashed potato in dough wrapping. It’s actually a tasty meat filling wrapped in mashed potato – like a Tibetan version of shepards pie. It actually tastes very similar. In our home, it would usually be served as a side dish with Machen la’s special fried rice. But I made it today and served it as a side with some spicy beef curry. (Instead of the traditional meat filling, I used some left over Chinmen (Yeast) Momo filling from the other day). It’s also nice to serve with rice and dal or just as a snack with some hot sauce. You can  experiment with different fillings. I once made a vegetarian version filled with sweet peas, and instead of the egg, I used some buttermilk.

I hope you will take the time to try to make some Shogo Shabril for your friends and family.  🙂 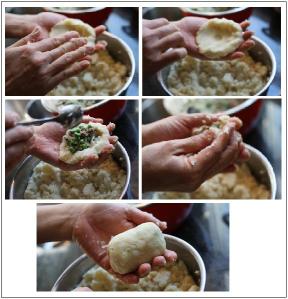 Start by making the meat filling. Heat a table spoon of oil in a wok or pan, add the onion, ginger, garlic, and sauté till color changes. Add ground beef, season with pepper, emma, some salt and sauté until meat is browned. Add some soya sauce and adjust salt to taste, cover and let the meat cook – 5-6 minutes until completely done and no liquid is left.  Add chopped spring onions, and your meat filling is ready .. let it cool for easy handling.

Next step, in a medium size bowl, add the egg and a little water, season with salt and pepper and beat it nicely. In another bowl, add the remainder bread crumbs. 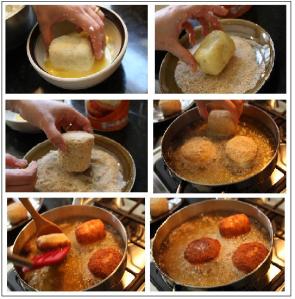 To shape the Shogo Shabril, take a good size portion of the potato dough, flatten it out in your palm, add a spoonful of the meat filling and gently close the dough around the filling – shaping it with your hand. You can shape them in the traditional barrel shape or the easier way is just to make a flattish round shape. Once done, dip this in the egg mixture, coating it completely and then roll it in the bread crumbs. Now its ready for final step – deep frying. (I like to prepare all the dough before starting to deep fry since you have to keep a close watch while deep frying).

Heat oil in a deep pot. I usually use a deep pan ½ filled with oil and then I fry one side until golden brown and then flip it around to fry the other side. Just be careful when flipping as it is quite fragile – best to gently use two spatulas, one to flip and the other to hold it along the side as your flipping making sure not to splatter or break. 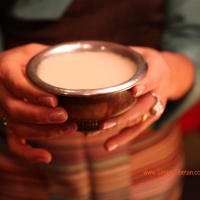 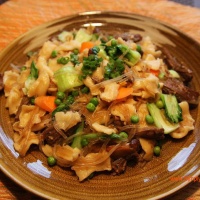 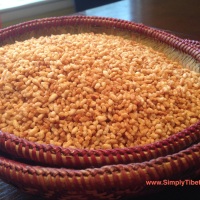 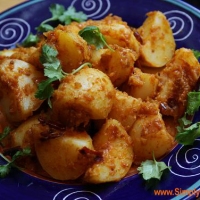